The Christian Case for Liberalism

We are committed to applying our faith to our political engagement and this does not stop when it comes to our political and party allegiances. As we have reflected on elsewhere, all political ideologies correctly hold to some Biblical truths and all political ideologies fail to recognise other Gospel realities. We cannot, therefore, add to the Gospel and demand allegiance to one party or cause, for we cannot bind what the Bible does not bind. Our interaction with parties, policies and voting is more often than not a wisdom call. One which should be influenced and shaped by our faith but not one we can attribute salvation status to. As Christians then we are free to choose our party and free to choose who to vote for.

We asked some Christian politicians and party members to help us think through the UK political parties and how their faith influenced/influences their party involvement. The following blog by Tim Farron MP explores why as a Christian he is a liberal. The views expressed in the blog belong solely to the author and do not reflect the views of UCCF.

It is our prayer at the Politics Network that this series is an encouragement and model for you as you think through how your faith informs your political engagement.

"When I was a young Christian at University, there was a challenge we used to hear at Christian Union meetings. It went like this. If it was against the law to be a Christian, would there be enough evidence to convict you?

It’s a good challenge, but of course in reality it’s not against the law to be a Christian. On Sunday I go to church with my family, I do so freely. My pastor preaches faithfully from the Bible without compromising or watering it down, and he does so freely.

I am open about being a Christian and I serve in the British Parliament as such with no threat to my liberty.

If anyone tries to threaten my life or liberty for seeking to live as a Christian, I can count on the state to protect me.

If you want to live freely as a Christian, you would struggle to find a country as committed to your liberty as this one. Christians who complain about a loss of liberty need to start by acknowledging that reality. And being grateful for it. So let me make it clear now that I do acknowledge this and I am grateful.

But genuine Christianity has always has been countercultural. It will always go against the norms of the day.

To be a Christian is to deny yourself and follow Christ, so Christianity rubs against every earthly culture. It is meant to. You should be a decent, good-mannered citizen, but you should never feel at home. You are to be a resident alien.

Five minutes on social media will show you a society hooked on self–esteem, self–worth, living to be true to ourselves… Christianity says that you are worth a vast amount to the God of the universe, but that you must humble yourself before him and live for him and others, not for yourself.

So, what earthly help can this countercultural belief system call upon as it battles against inevitable disdain? The answer is simple. The answer is Liberalism.

I am a liberal to my fingertips. I’m not pretending to be a liberal. You may be surprised to hear that I didn’t become a liberal as a cunning career move or to impress a girl or to boost my social standing. I joined the liberals because I am a liberal, funnily enough. I believe in the equal worth and value of every person, I believe that every person should be free to live as they see fit, to hold their beliefs, their conscience, their world view, and to express them as they wish. I reject forced conformity whether that comes from the law or from social pressure.

I joined the Liberal Party at 16 and became a Christian at 18. Although it happened in that order becoming a Christian was entirely different. You see, I didn’t choose Christianity because I liked the ‘manifesto’. It’s not that I looked through the Bible’s teaching in the ‘Sermon on the Mount’ and thought, ‘I agree with that – how do I join?’ No. I became a Christian because it struck me with an almost physical force that Christianity is true. But at no point in the years that have followed has this created any doubt in my mind that I am a liberal.

If our values are relativistic, if they are shifting, if they depend upon the temporary norms of this age, then the freedoms you bank upon today, cannot be guaranteed tomorrow. Our liberties are in the hands of unstable forces, we cannot have confidence that our rights will still be our rights from one generation to the next because we cannot call upon any authority in support of those rights.

Christianity provides the values that permit liberalism to flourish.

As Christians, there are a couple of Biblical truths that we would do well to remind ourselves of more often. First, we are all equal under God and we must not judge others or else we bring judgement on ourselves. Second, God will judge. He is not indifferent to our choices. It is not unloving or judgemental for Christians then to point that out.

To believe in the Bible’s teaching and to also believe in people’s right to reject it and to live as they choose, is about as close to a pure application of liberalism as you could get." 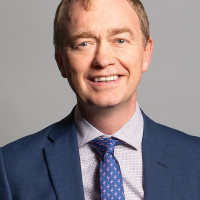 Tim Farron is the Liberal Democrat MP for&nbsp; Westmorland and Lonsdale , and has been an MP continuously since 5 May 2005. He currently (January 2022) undertakes the roles of Liberal Democrat …