Is a Christian Approach to Brexit possible?

Britain is a nation divided, containing a church divided. The 2016 EU Referendum split the country by 52% to 48% and the polls haven’t moved much in the three years since.

Christians have been no less ready than anyone else to voice their Brexit views, from Thought for the Day Regular Giles Fraser, whose commitment to the Leave cause seems unwavering, to Bishop Nick Baines whose similarly dogged views include the assertion that, through its commitment to delivering Brexit, we now have a government “whose approved policy is to make the country poorer”.

Those taking different sides of this debate have liberally, and sometimes ludicrously, splashed Scripture around to justify their position. From the Remain corner, this has included citing Paul’s injunction to the Philippians to ‘do nothing out of selfish ambition or conceit', linking it to the slogan Take Back Control. To justify a Leave perspective, and this is no exaggeration, we have had deployed verses like Deuteronomy 32:8 which talks of ‘the Most High’ fixing ‘the borders of the peoples according to the number of the sons of God’.

What are we to make of these apparently competing claims, that Scripture can be used to confirm a Remain view as well as a Leave view? Both cannot be right; indeed both, I believe, are wrong.

First, the Bible is very clear that rulers only rule with God’s say-so. When we start invoking scripture – especially single verses taken out of context – to justify a position on nationhood, we are in deep trouble (remembering the words of apartheid-era South African President PW Botha who said ‘God separated the races, we didn’t’). In the wider sweep of history, Brexit is but a swift moment in time, a fleeting realignment of nations that are prone to rage, prompting God to scoff and laugh (Psalm 2).

But the Bible also points us to a radically different set of criteria by which we can look at issues like Brexit in order to work out how they fit in to His wider plan to bring all things under His rule (Hebrews 2:8).

1 Timothy 2:1-2 urges us to make ‘prayers, intercessions and thanksgivings for all people, for kings and all who are in high positions, that we may lead a peaceful and quiet life, godly and dignified in every way’. Our purpose as Christians is to bring glory to God and to spread the gospel to the ends of the earth.

The Bible frees us from the worry that the world is out of control or that we are simply at the mercy of random political forces. God is creator, Christ has triumphed, but our role is to work for outcomes that enable firstly the good news of that wider reality to be spread abroad, and secondly that enable the unloved to be loved, the widowed and orphaned to be cared for, and the hungry to be fed.

Whether Brexit will make either of those objectives easier is an empirical issue, the outcome of which we cannot know until we have the benefit of 20/20 hindsight. If you are a Remainer, you probably believe that staying in the EU will maximise economic advantage. If you are a Leaver, you may well take the opposite view. That is a matter of conjecture and personal opinion. There is no Bible verse to tell us the answer.

When it comes to the spread of the gospel, however, there are two competing approaches to consider. In the Remain corner is the argument that freedom of movement maximises the opportunities to reach the farthest corners of Europe with the gospel – a continent with plenty of ‘not-spots’ for the good news of Christ. After all, the gospel’s early spread was aided hugely by Palestine’s position at the epicentre of the world’s major trading routes.

One key question to ask, though, is just how well have we done at utilising decades of free movement? What could we have done better with our membership of a free trade area that held as sacrosanct the principle that you can live and work in any part of it?

In the Leave corner is the claim that, since there is no cohesive sense of European nationhood, artificially forcing independent nations into political union risks unleashing centrifugal forces which would render a ‘peaceful and quiet life’ impossible. Where people feel they are being ignored and demand change, to refuse them that change risks provoking civil unrest.

There is a view of Brexit, with some evidence to support it, that it is merely the manifestation of a wider breakdown of the Social Contract between government and the people, that the Leave vote and subsequent populist gains are indicative of a malaise in society that conventional politics appears unable to mend.

Whether Brexit is the right or indeed the only way to remedy that malaise is a far wider question, but try and remedy it we must. While God in his mercy and grace enables the gospel to flourish despite civil chaos, Jesus is the Prince of Peace and God is a God of order.  When the choice is either disgruntlement or contentment we are duty-bound to pursue the latter, to ‘live at peace with everyone’ (Romans 12:18).

Brexit is going nowhere soon regardless of who wins the election in December. Brexit will require years of negotiation to complete. A Christian perspective on the detail may be elusive but we must not fret. Christ reigns, not us.

This article was originally published ahead of the December 2019 General Election. Whilst the Brexit debate no longer dominates British politics quite like it did, this article continues to provide a helpful model for thinking through an issue in the news 'Christianly'. We hope it helps you do just this. 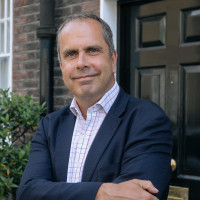 A barrister by training, Andrew Hawkins was founder and chairman of the polling firm ComRes from 2003 until its acquisition by Savanta in 2019.  He is also on the Board of Premier Radio and Mission …

View all resources by Andrew Hawkins