The Reformation never really ended. Indeed, reformers from the 16th century like John Calvin, Martin Luther, and Johannes Oecolampadius are long gone, and so are those that succeeded them, but the core principles of the Reformation remain relevant and true today. The foundation for all such principles being sola scriptura, which Wolters’ ‘Creation Regained: Biblical Basics for a Reformational Worldview’ has as its foundation to understand what God has to say about how we, as Christians, should see the world. He splits his book up into 4 main chapters: 1) Worldview, 2) Creation, 3) Fall, 4) Redemption, and explains how Christians should approach these categories and how they impact every area of life.

Firstly, Wolters tackles the issue of ‘worldview’, defining it as ’the comprehensive framework of one’s basic beliefs about things', even going on to explain a little bit about each part of this statement, such as ‘things’, ‘belief’, and ‘basic’, to ensure there is no misunderstanding about such an integral concept. Everyone has one of these things, a ‘worldview’, and people need one since we are incapable of holding purely arbitrary opinions or making entirely unprincipled decisions.

So then, to have a biblical worldview is simply to take seriously what God has said about the world, not just cubby-holing God into our private lives but listening to what He’s said about the rest of life. This could mean that our view of the sanctity of life shouldn’t just be a personal opinion, nor should our care for the poor and oppressed, but these should be vigorously advocated for in the public square.

Therefore, what makes this view ‘reformational’ is that it deals seriously with the meta-narrative of Scripture: Creation, Fall, and Redemption, which inevitably shapes the way we view the world since these touch everything in the world.

If God has such wide-spanning claims on life, then what relation does He have to the world He created? Wolters pushes back against common misconceptions – even among Christians – that God just creates the world and lets it tick along while He takes a backseat. Rather, God called the cosmos into existence and is continually holding it together (Colossians 1). Therefore, because God is truly the Lord of all creation, there is no difference between the need for the wind and the waves to obey God and for His creatures – us – to obey Him, and He extends His rule over His creation through mediators, namely, us, who have been tasked with being fruitful by filling the earth and subduing it; to work the earth and take care of it. Not just parts of the world, but every bit of the world.

Integral to understanding why God commands us to actively engage in His world rather than become hermits, is that all of creation was created ‘good’ and it is ultimately our rebellion that accounts for the misery of the world, rather than something inherent in the created order. Indeed, our rebellion started off with the initial act of Adam’s disobedience. However, it wasn’t just a single, isolated act of disobedience, but caused the created good order to be tainted with sin. There are everyday examples of good things being distorted by sin: the perversion of marriage and sexuality, the breakdown of families, even the state has become distorted from what God sees as good. Sin is more than guilt and shame, rather it’s an alien invasion of God’s creation, completely foreign to His purposes, and simply cannot and does not belong.

There is, therefore, a glaring need for redemption. Indeed, ’every area of the created world cries out for redemption and the coming of the kingdom of God.’ This isn’t a ‘scrapping’ of God’s creation but a restoration of it, and this must shape how we live and see the world. Instead of scorning marriage, emotional expression, sexuality, and politics, we are God’s mediators to reform and redeem it, not autonomously as if we could do it in our own power or with bare rationalism, but with the certainty that Christ works through us in redeeming a fallen world, bringing the gospel to bear on all parts of life. In a sense, nothing is off-limits from God’s restorative work in Christ, as Christ is reconciling ‘all things to himself’ (Colossians 1:20). The curse is found far and wide, but the blessing goes just as far.

There then really is no ‘neutral ground’ in this spiritual battle, as Christ makes claims to all. God builds his kingdom through us, and because we have been given the ‘ministry of reconciliation’ (2 Corinthians 5:18), then each Christian has their part to play, no matter what area of life God places us. So whenever, for example, family life grows in obedience and conformity to God’s law, His kingdom advances. And although the victory is assured, and at times it looks like there might not be a point in trying, God’s heart for redeeming all areas of the world is clear. As redeemed believers, we should long to see obedience to Him in all areas of life and although we won’t see it perfectly now, we can play a part.

Therefore, think about these things. How might you carry out the ministry of reconciliation day-to-day in your degree or job? Politically there are plenty of ways, from writing to your MP to volunteering with NGOs to working in the Government in some capacity. Regardless, prayerfully consider how you might best obey the call to carry out the ministry of reconciliation in whatever situation you find yourself in, or wherever the Lord calls you to serve. 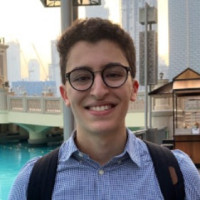 Munzer studied International Relations at the LSE and is now working with an MP as part of the CARE Leadership Programme. He loves Reformed theology, beer, and exercise, in that order.

View all resources by Munzer Wehbe