Awaiting the King grapples with some huge questions, central of which is the relationship between the earthly city and the city of God.[1] If we are citizens of Heaven (Phillipians 3:20), what does this mean for how we live now? Within this are complicated issues of church and state, Christ and culture, and the ‘now’ and the ‘not-yet’, all of which feature in this conclusion to James K. A. Smith’s Cultural Liturgies trilogy.

Desiring the Kingdom, the first in the trilogy, changed the way I understood the world, as I recognised the power of liturgical formation. Smith’s thesis was that we are shaped by our liturgical practices – the habit-forming activities we regularly participate in.[2] Significantly, this means we are not merely being shaped by the liturgy of the church, but we are also being formed by the liturgies of the world, as his analysis of a shopping centre demonstrates.[3] Awaiting the King continues on the same trajectory, embarking upon a liturgical account of politics.

Early in the book, Smith identifies that the relationship between faith and politics is often conceived in spatial terms: the ‘religious sphere’ and the ‘political ‘sphere’ (which in turn are separated from the spheres of the arts and sciences).[4] Rather than buying into the mutual exclusivity of politics and religion, Smith sees them as inextricably intertwined. As he writes...

The first chapter of the book sets out to demonstrate this, describing politics as

‘A nexus of rites that are bent on shaping what is most fundamental: my loves.’

As Smith showed in Desiring the Kingdom, our practices direct us to love (read: worship) certain things, and this is no less true for politics. But, because it is directing us to certain objects of worship, this puts us on the territory of the religious.

Having identified politics as liturgical (rites which shape what we worship), Smith goes on in the second chapter to identify the church as inherently political—

‘The doxological claim “Jesus is Lord! (Iesus kyrios!) is also a political act in its refusal to say “Caesar is Lord!”'

Our worship forms us as followers of King Jesus, which becomes our constitutive identity as we go out into the world. The rest of the chapter illustrates this through a commentary on political theologian Oliver O’Donovan’s work The Desire of the Nations. This illustrates the political nature of the Scriptures, specifically the narrative of God’s kingdom come ‘On earth as in heaven’ through the coming of Christ the King. Through this, we see the implications of Christ as the true aim of worship for our political engagement before he returns.

Within this is what Smith terms the ‘penultimate/ultimate distinction.’ As St. Augustine argues, God is both our source and end – He is the ‘ultimate’ goal of our love. All other things are ‘penultimate’ – they aren’t our ultimate goal, and so must not be loved as He is. They must be loved only in as much as love of those things leads to love of God.[5] Liberalism claims to be penultimate: in order to function in a pluralistic society with a number of competing ‘ultimate’ commitments, it poses itself as a politics without an ultimate commitment. However, Smith compellingly shows that this is a false claim – liberalism’s alleged noncommitment is itself an ultimate commitment and one which frequently claims religious beliefs as incompatible with the politics it expounds. If all politics is liturgical, even liberalism is forming us to love certain things, many of which are antithetical to love of God and neighbour. Smith’s solution is to reclaim a politics of virtue, where the Church plays an active role in showing the world what is true, honourable, just, pure, lovely, commendable, excellent, and worthy of praise.[6]

The book weaves together these themes, applying it to various elements of political engagement, engaging with a wide repertoire of political theologians and current debates. I found the scope of the book highly stimulating, introducing new ideas in a careful and nuanced way. The most significant chapter for me, especially in the context of the trilogy as a whole, was the discussion of the failure of liturgical formation. Smith asks: how can someone be immersed in the liturgies of the church, and yet fail to live as a faithful disciple?[7] Does such failure disprove Smith’s whole argument about the importance of liturgical formation?

"Our formative claims about Christian worship are never staked on some supposed adequacy of “Sunday only” participation."

There is a real temptation to presume that our two hours together on a Sunday have a disproportionate, pseudo-magical effect on the rest of our week. But, rather, Sundays mark the centre rather than the entirety of our Christian practices. Ultimately, Smith recognises that the efficacy of the liturgy is not merely in the words and actions. In the liturgy, we encounter Christ, through the Holy Spirit. In other words, our formation requires grace.[8]

I think it’s important to note, however, how contemporary church culture has a dangerous habit of cherry-picking its favourite liturgical practices (for example the creed), whilst neglecting the fullness of our liturgical heritage. Do our liturgies reflect the long-practiced traditions of the church, or do they reflect a particular cultural moment? What effect does this have on our liturgical formation? I fear that, out of a desire to make church ‘accessible’, we run the risk of a shallow liturgical formation, without the richness and regularity of practices like confession and absolution, the Eucharist, and the peace. The liturgies of the Church were developed to form us into the image of Christ against the (de)formation of the world, and we neglect them at our peril. Especially when the secular liturgies we encounter are so rich (as witnessed clearly in our passionately bipartisan politics), it is important to make full use of the church’s liturgical resources to counteract this powerful formation.

[1] Famously articulated in St. Augustine, The City of God.

[2] The word ‘liturgy’ has various connotations, depending upon where it is said and heard. Desiring the Kingdom uses it simply to recognise that our practices shape our habits, which in turn shape what we love/worship.

[7] Smith calls this ‘The Godfather problem’. In the famous baptismal scene, Michael Corleone renounces Satan and all his works, whilst we simultaneously witness the assassinations carried out on his command.

[8]Smith, 207. Without wanting to get too deep into the nature/grace debate, I would note my hesitance to make the absolute distinction between liturgical practices and the work of the Spirit this might imply. 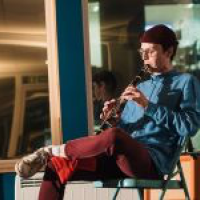 Charlie is a music graduate, currently working for Grace Church Hackney. He writes on a variety of subjects, including the arts, theology, and public life.&nbsp;As a clarinettist, much of his work …

View all resources by Charlie Watkins