The Power of a Political Prayer

My career in politics started with a telephone call and a prayer. The telephone call was from a health professional requesting a food hamper for one of her patients. At the time, I was a full-time minister of a Pentecostal church in Sheffield. I was informed that her patient had no food at all. I immediately grabbed my receptionist Lisa, drove to the other side of Sheffield, and knocked on the door of a three-storey house.

A little woman appeared, and two things were apparent. The woman could not speak a word of English and she was doubled over in pain. Lisa and I motioned that we would bring the food hamper inside. We climbed two flights of stairs to a small attic bedroom. There was a single bed, a camping stove, and a black plastic bag. We handed over the food. Just as we were about to leave, I noticed something moving on the bed. I thought, ‘Oh my word! There is a rat in the room’. I looked again and saw a new-born baby.

Once leaving the property, Lisa and I stood on the pavement and sobbed. God had broken our hearts for the poor.

I remember uttering the prayer, “Lord, I have had enough of this. I feel as though I am putting a plaster on a gaping wound. If it’s your will, let me be an influence to the influencers.” I didn’t realise at the time; those fumbled words of a frustrated prayer would change my life forever.

Shortly afterwards, I started to receive prophecies regarding the word ‘politics’ and subsequently left full time ministry to step out into the political arena.

Prayer has been woven throughout this political journey. It doesn’t matter how good I am at writing briefings, networking, or public speaking, it is prayer that brings success.

The Bibles tell us that through the work of Christ, we have access to the God who …

Why on earth would I endeavour to do this journey without him?

Politics, at times, is a dark place. I need to make sure that I am constantly connected to the Shield, the Shepherd, and the Light of the World. Prayer should never be the last resort; it must be my first. I want to make sure that I am in the centre of His will (Psalm 127:1), obedient with what He has placed in my hand (Matthew 25:14-30) and empowered to accomplish the task at hand (2 Cor 12:9).

In 2016, following the EU Referendum and the no-confidence vote in Jeremy Corbyn, I had to chair a nomination meeting at my local Constituency Labour Party. I wrestled with God as I really didn’t want to go to the meeting, never mind chair it. I eventually surrendered to him saying, “Well, you had better turn up Lord!” I prayed and fasted the week leading up to the meeting. Friday evening arrived and I was in a room of 130 very angry members.

At the beginning of the meeting, I addressed the meeting and set the tone of the discussion (I even mentioned Proverbs 27:17: “as iron sharpens iron so one person sharpens another”). As I sat down, I felt the presence of God descend on the room. He was tangible. After the meeting, a member asked how I did it: how I had created a meeting where she felt loved. Prayer had made a way, ushered in the presence of God, and changed the political atmosphere. On that day, I learned that a prayed-up Christian isn’t a thermometer but a thermostat: we don’t just get to read the temperature, we can set it. When we show up, things change.

In 2019, I asked Darren Millar, a Conservative Welsh Assembly Member, how I could pray for him. Incidentally, I ask every politician, saved or not, how I can pray for them. He asked me to pray for a Labour MP who God had placed on this heart. I started to pray for the MP and felt a Spirit-led nudge to ask her for a coffee.

During our coffee, she asked the typical politician question of how she could help. I gently explained that I didn’t need any help and that I had been praying for her. She immediately shared what had been happening in her life. I offered to pray for her and asked if I could lay hands on her. As I prayed, I could feel the presence of the Holy Spirit all over her. And so could she!

At her request, I prayed with her on a regular basis and a few months later she gave her life to the Lord. Prayer had stirred my heart and led this woman on a journey to salvation. On that day, I learned that a prayed-up Christian not only changes the narrative of a nation but also the course of an individual life.

Every morning, I start with prayer. I enter His courts with thanksgiving and praise, I confess my sins, I make my petitions, I listen for direction, I surrender my life afresh, and ask for a refilling of His Holy Spirit. To be everything that God has called me to be, I need to remain in Him. And as I do, the promise is:

If you remain in me and my words remain in you, ask whatever you wish, and it will be done for you. This is to my Father’s glory, that you bear much fruit, showing yourselves to be my disciples. (John 15:7-8).

If we can ask for anything, what are you going to ask for today? Let’s be encouraged that our prayers are powerful. They change lives, events, campuses and this nation. Let us pray! 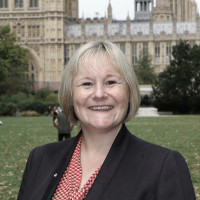 Louise Davies is the Director of Advocacy and Policy&nbsp;at&nbsp;Christian Action Research and Education (CARE) which exists to bring a uniquely Christian insight to policies and legislation in the …

View all resources by Louise Davies