Are we the Bad Guys?

How can we share Christ in a world seeking justice? It’s a question that plays on my mind and maybe yours too. Some of you reading this might be thinking: ‘isn’t it great that the world is seeking justice, Jesus is all about justice.’ while others will be thinking ‘This world doesn't want to hear about Justice from Christians’. Both have some credence but we all have to acknowledge that the cries for justice are only getting louder.

The #MeToo campaign, Black Lives Matter and Extinction Rebellion are just some of the social justice movements that have created demands for change and justice in areas of sexual abuse, racism and climate change. Yet it’s also in the little things like where you shop, what you eat (or do not eat), and who you vote for, these are all seen as an indication of your beliefs about justice.

What’s the outcome for Christians trying to share the Gospel? Well, one outcome is that the questions are changing. Let’s look at an example: my Dad’s generation dealt mainly with questions of rationality and evidence, like ‘Hasn’t science disproved God?’ or maybe ‘How can we trust what the Bible says about Jesus?’.

Yet the questions I, and maybe you, mainly get at university are questions of morality and justice: questions like, ‘What do Christians think about BLM/ LGBTQ/ Extinction rebellion and how are you supporting these causes?’ or ‘Is Christianity Sexist?’ It’s clear, the questions have changed. But more than that, some may even view the Church as outright immoral and complicit in the crimes of the West. So the question stands: how do we share Christ in this climate? How can we speak of Christ when the world, and perhaps even ourselves, are beginning to wonder whether we are the bad guys? (Being the Bad Guys, Stephen McAlpine)

Well simply? We tell them the Gospel. I bet you saw that coming, didn’t you??? But let’s dig deeper into this. Dan Strange has written a great book called ‘Plugged In’ in which he explains that the Gospel is the ‘subversive fulfilment’ of culture. By which he means, the Gospel both confronts the lies of our culture (subverts) and connects with the truths of our culture (fulfils). Take 1 Corinthians 1:22-24 for an example :

"Jews demand signs and Greeks look for wisdom, but we preach Christ crucified: a stumbling block to Jews and foolishness to Gentiles, but to those whom God has called, both Jews and Greeks, Christ the power of God and the wisdom of God."

Jewish culture revolved around power and therefore Jesus is a ‘stumbling block’ (v23), as Jesus crucified doesn’t fit with their ideas of power and therefore confronts their culture (subverts). Yet it also connects with the truth of the culture, which is that Jesus is also the ‘power of God’ (v24) and therefore their longing for a powerful saviour can only be satisfied in Christ (fulfils).

Something similar happens when the Gospel met Greek culture which structured itself around the idea of wisdom and knowledge (v22). Jesus' death on the cross, much like in our society, confronted/subverted their ideas of logic and wisdom. Yet, we are told that Christ is ‘the wisdom of God’ (v24) and thus true knowledge is only found in Him.

And it is the same with our culture and political movements. The Gospel calls out the inconsistencies of our world, calls for repentance and shows that all those longings are fulfilled in Christ. It both confronts and connects. A group like BLM rightly touch upon the marginalization and mistreatment of black lives, yet often misdiagnose the solution. Though there is plenty more that needs to be said on this matter, the ultimate solution is to be found in Jesus, the one that tells us to go to the ends of the earth uniting both Jew and Greek and creating a Kingdom that is filled with every tribe, tongue and nation.

To be clear, this does not mean that Jesus doesn’t call us to have an active role in seeking justice for all. Moreover, the Gospel actively invites us to ‘love because he first loved us’ (1 John 4:19), and out of this love, we should deeply care for the political and social issues in front of us. From Martin Luther King Jr. to A21 (A Christian organisation fighting human trafficking) there are many who deeply care for these issues because of their love for Jesus and His love for people. However, every issue we are presented with tells a story of how this world views justice, and while we can affirm so many of the truths of our culture's fight for justice, we have to know that Jesus also challenges our culture's lies.

Whenever that feels discouraging we have to remember that the Gospel is in fact the greatest and most fulfiling story we could tell. In a world fighting for justice, the Gospel shows Jesus dying on a cross, confirming that God cares so deeply for justice that He could not leave sin unpunished. Yet, at the same time, on that cross, He shows that He was willing to die and take the punishment for all so that all of us have a way back from the injustice we have perpetrated against God and others. The Gospel, therefore, is a story and a reality that can fulfil our deepest desires for justice.

The truth of our generation is that we stand in a very divided culture. A culture that has little to no hope of truly satisfying our longing for justice without Jesus, who died and rose to deal with all sin and suffering. So, why don’t we as Christians be the ones to stand up and present the Gospel? The very Gospel that fulfils all the longings of the heart seeking justice yet still challenges our political idols. The very Gospel that gives us confidence that the good news of Jesus Christ is not only meaningful but also powerful in the hunt for a more righteous world. So, let us boldly tell a more fulfilling story as we proclaim Christ, the just king, to a world seeking justice. 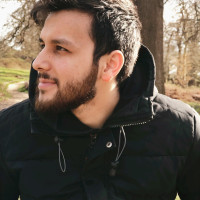 Nathan Addington is a recent business graduate who recently finished Relay, who loves everything to do with sport, fashion and gaming. In his spare time Nathan’s enjoying a coffee with friends or …

View all resources by Nathan Addington