In 2014 the former Archbishop of Canterbury Rowan Williams caused shockwaves when he declared his belief that Britain was now a ‘post-Christian society.’[i]

While we can still defend the Christian heritage of our nation, and the ongoing contribution that men and women of faith make to national life, it is an undeniable fact that ‘religiosity’ is less prevalent in Britain than in previous generations. The majority of students attending a university in Great Britain today would not identify as Christian and perhaps have never explored Christianity in any detail. Students in Christian Unions, therefore, face a certain challenge: how do they remain distinctive and effective in an environment where the Christian worldview is at best not understood, and at worst considered mad and dangerous?

For Christian students attending university today, and especially students with an interest in politics, Professor John Lennox’s new book Against The Flow is the must-read guide to precisely this question. Following the story of the book of Daniel, Lennox skilfully unpacks the book for a modern audience, not only explaining the context of this section of Scripture but demonstrating that several of the challenges Daniel and his contemporaries faced in ancient Babylon are not dissimilar to those faced by Christians today.

Remaining distinctive but fitting in

The book explores several themes throughout its 416 pages, but perhaps most significant is the defining issue of our age: identity. In the Book of Daniel, we begin the story with the Kingdom of Judah being overrun by the Babylonians, and with several of their best young men being taken into captivity, including Daniel. The captive Jews now face a profound question – where do they find their identity in an environment and culture that is completely alien to them, and indeed is diametrically opposite to the monotheistic Kingdom of Judah? Indeed, so important is this theme that Lennox spends the first eight chapters unpacking the historical context of the book of Daniel, leaving the reader with little doubt that the book of Daniel is a dependable account of events, and that ancient Babylon possessed a culture just as relativistic as our own.

Daniel is quite correctly held in high regard as an example of a believer unafraid to trust in God, who refused to compromise his faith and yet served faithfully and successfully in the political courts of the Babylonians and Persians. Against the Flow demonstrates that this life well lived was certainly not without cost or difficult choices, but never seeks to attribute the success of Daniel or his friends to any particular skills on their part. From the very beginning, a principle is set out: that Daniel and his friends lived in one city, Babylon, but they lived for another city, Jerusalem. They worked hard and diligently, and they thrived in the environment they were placed in, but they remembered that their ultimate identity was not in the names and positions and privileges granted them by their Babylonian masters, but instead as the people of Holy God.

Courage to take a stand

One cannot help but be thrilled as Lennox takes the reader through the narrative of the Book of Daniel. He does not shy away from exposing how much it cost Daniel and his friends when they chose to stand up to their masters – whether in the matter of their diet, whether to bow to the king’s idol or in the matter of praying to the king. The last two in particular are essential reading for students of politics, addressing the most fundamental question of freedom of conscience, and especially freedom of religion. In a university context in which it is increasingly difficult to express one’s religious beliefs, and authorities of all kinds increasingly encourage us in what to believe or think, the narrative of Daniel shows how the Christian faith commands genuine religious freedom and highlights the cost when earthly powers would disregard the right of humans to choose what they believe.

The book is far from whimsical however and is seated in practical advice. A distinction is drawn between the choice to adopt Babylonian names and customs, and the ways in which the Jewish captives refused to completely adopt the ways of their new home. All of the advice is rooted in one simple question: “Which city are you living for?” That one question enabled Daniel to adopt a Babylonian name that glorified the Babylonian god Baal because he understood his identity was not rooted in a name given to him by men, but his ultimate identity in Christ. It also enabled him on the other hand to determine that the food prepared for the emperor was not fit for him, and would mean choosing to live for Babylon rather than Jerusalem. Reading this book will help Christian students to think for themselves what it looks like to consciously live for Christ, even in the most challenging of environments. Lennox very helpfully provides not just the simple underlying principle, but also some guidance, observations, and examples of what this looked like for Daniel and his friends. For students considering how to be an effective witness, these chapters are worth reading.

A bigger story than the one we see

Lennox’s great triumph in this book is in his wonderful weaving of the narrative sections in the first half of Daniel, with the prophetic sections in the second half of the book. It is easy to assume that all of the practical advice for students is to be found in the first six chapters of Daniel and there is little immediate practical application in the prophecies of chapters 7 to 12. Even aside from the truth we hold to that all Scripture is of use, Lennox demonstrates that we miss out on much encouragement if we end our reading at the end of Daniel Chapter 6.

Using a very simple schematic, Lennox compares the events of the first six chapters of Daniel, to the prophecies of the final six chapters of Daniel, highlighting the mirroring of certain themes and ideas – not least of threat, challenge, and ultimate restoration. This technique wonderfully shows how the narrative of Daniel’s life, coupled with the prophetic insights gifted to him by God, points to a greater story than the one we see in front of us day to day. Coming back to the fundamental question of identity, and of who and what we live for, the prophecies of Daniel remind us of the supreme and eternal lordship of Jesus Christ, and the ultimate destiny of world history – Christ’s return and the establishment of His eternal kingdom.

Having the great story in view changed the way Daniel viewed his captivity in Babylon, and it certainly impacts us today. Through the lens of Christ’s victory at the cross, and the assurance of the eternal life and purpose for which he has saved us, the struggles a student faces today are considered in a very different way. Rather than ask whether one can really refuse to bow to the wisdom of this age, Lennox’s book inspires us that when we see God for who he is, and what he has done for us, the overwhelming desire of our hearts is to respond with faith rather than fear.

To those students, therefore, that study politics, and wonder if their Christian worldview is welcome; to those students standing for sabbatical posts and anxious that their faith will be tested; to those students worried that being in the public square will corrupt them; Against the Flow is a powerful testimony to the goodness and faithfulness of God. The testimony of Daniel and his friends shows that it is not only possible for Christian students today to live in the public square, but even for them to thrive in the public square. This book will excite you, encourage you, inspire you, and leave you awestruck at God’s providence and mercy. There can be no better encouragement for a student looking to seat their identity in Christ while at university. 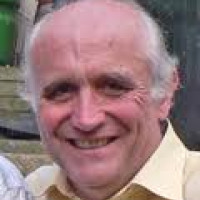 Peter May is the author of The Search for God and the Path to Persuasion .  From 2003 to 2010 he was Chair of the UCCF Trust Board. He is a retired GP.

View all resources by Dr Peter May